Designing for Health and Wellness: The Next Great Challenge We have sustainable design to conserve our resources and resilient design to protect us from the changing environment. Now active design is coming to make us healthier.

The basic purpose of building codes and standards is to protect the health and safety of occupants. Model codes absorb accepted science in time, but they can’t absorb it all. Codes must be written in enforceable language, deemed cost effective by core stakeholders in real estate and the building trades, and sold to constituents.

Still, the evolution continues, particularly in codes for sustainable and resilient design.

In April 2017, the International Code Council (ICC) announced it would, in partnership with the U.S. Green Building Council (USGBC), the AIA, and the Illuminating Engineering Society (IES), merge its forthcoming 2018 edition of the International Green Construction Code 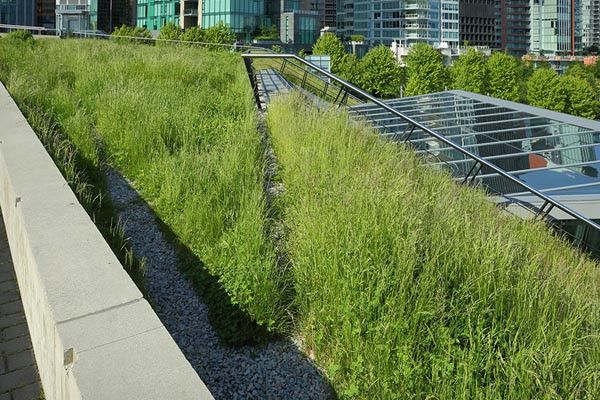 (IgCC) with ASHRAE 189.1, a parallel standard for high-performance green buildings. “IgCC powered by 189.1,” an overlay code fully compatible with the family of ICC codes, hopes to usher in an era of widespread green design practices.

The specifics have to be hammered out over the next year, but according to the ICC press release, the goal of the merged model codes is to “provide fundamental criteria for energy efficiency, resource conservation, water safety, land use, site development, indoor environmental quality, and building performance that can be adopted broadly.”

Given the world’s woeful rates of obesity and lifestyle-related chronic disease, the dual concerns of indoor environmental health and community wellness are a key battlefield in green design. While it’s unclear how explicit the language will be in the 2018 IgCC regarding strategies for public health, popular movements like active design and above-code certifications such as Fitwel and the WELL Building Standard are making a loud splash.

In 2015, an astonishing 74 percent of Americans were overweight or obese, up about 1 percent each year since 1970. Childhood obesity has skyrocketed to the point where today’s 10-year-olds have a lower life expectancy than their parents. For many, a key antidote to this societal shift lies in active design.

According to the New York–based nonprofit the Center for Active Design (CfAD), this design practice is an evidence-based approach to development that identifies planning and architecture solutions to support healthy communities. Inspired by the legacy of urban activists who designed to solve infectious disease crises of the 19th century, CfAD’s initiatives look at all aspects of design for health—physical, mental, and social—at home, work, and throughout a neighborhood, creating opportunity by optimizing a setting, no matter how incompatible it may seem.

In 2010, the New York City government collaborated with the CfAD to codify the very first Active Design Guidelines for public buildings and those that receive public money, including new affordable housing. On the community level, cycling infrastructure and new park space exploded while strategic pieces of roadway and parking lots were ceded to pedestrians. These moves had a dramatically positive effect on the livability of the urban realm, spurring investment along the way.

“Enlightened design of buildings and civic space dramatically affects mental health by mitigating social isolation and stress,” says Joanna Frank, founding executive director of CfAD and New York’s former director of active design. “Furthermore, the quality of design impacts the level of trust and participation within a community.” CfAD’s “Assembly” initiative is exploring this important intersection. How does place-based design invite people into civic space? How do designers represent and support the cultures and unique histories of the community? One aspect is downright intuitive, but often overlooked: Upkeep of the existing environment plays at least as great a role in community well-being as does new development.

The workplace is a critical front in the war on chronic disease and bad habits. Office workers spend 8.1 hours a day, five days a week, more-or-less anchored to their desks. (Add to that another hour they may spend in their car getting to work.) Two of the newest certification programs on the market are taking the lead in upending workplace givens: isolation, junk food, harsh lighting, and stale air, to name a few.

Debuting in early 2017, Fitwel is already a leading system for optimizing building design and operations to improve worker health and productivity. Ninety projects have submitted for Fitwel certification, governing 165,000 employees in the U.S., Canada, and the U.K.; another 600 projects are committed through 2018. The U.S. General Services Administration, a partner in Fitwel, is enrolling its entire portfolio of public buildings. Other early sign-ons come from Alexandria Real Estate Equities, builder of life science campuses, and the global architecture firm Perkins+Will.

Fitwel asks clients to assess their baseline building conditions for air and water quality, lighting, and physical design. It then directs them to layer on achievable health benchmarks and tools, targeting everything from vending machines and drinking water to bike rooms and gyms or terraces and rooftop gardens. Idle open space may be instilled with uses like walking paths and farmer’s markets. The point is to create opportunity by optimizing your setting, no matter how incompatible that may seem.

Frank sees a bright future for this endeavor. “Sustainable thinking has done an amazing job to codify and bring green design into the mainstream marketplace,” she says. “We looked at how these forces transformed the market, and thought about how we can democratize information to a similar end, translated in a way that it can be widely acted upon.”

In terms of cost considerations, many of the tools of active design and Fitwel meet the bar for widespread code implementation. If the program shows major gains in worker health, productivity, and retention over time, codification could follow.

Whereas Fitwel is steeped in active design, the International Well Building Institute’s WELL Building Standard harnesses the technology behind diverse considerations like air and water quality, lighting, material use, mobility, and comfort in a comprehensive LEED-like scoring and rating system for new and existing buildings.

Though WELL version 1.0 is currently confined to office buildings, with more than 400 participants worldwide, there are already pilot programs in place for multifamily residential, retail, restaurant, and educational facilities in future refinements of the standard. WELL’s health-optimizing features can be applied in the greatest number to entire buildings, but there are also opportunities for partial interior application and for “core and shell” structural upgrades done in the building design phase—going as far as considering opportunities for wellness inherent in site selection.

Leveraging its own dire stats on obesity and chronic disease, the Sacramento, Calif., region is working to bolster healthy communities through public and private sector initiatives. A coalition called Design 4 Active Sacramento (D4AS) formed to produce guidelines for policy change through a health lens. As fortune would have it, at the same time Sacramento County was updating its Housing Element and its Zoning Code, an exercise done once every 30 years. “We were able to convince policymakers to let us review and rewrite portions of the design guidelines and add an appendix detailing active design,” says Judy Robinson, Sacramento County’s sustainability manager and D4AS advisory council chair.

The new Zoning Code, adopted in 2015, carries a mix of design and development prescriptions and voluntary actions—mixed-use districts and complete streets among them. D4AS has made Sacramento a valuable case study in codifying active design in a mid-sized metro area.

A working relationship also formed between the Planning and Public Health departments, one that reasserts the primacy of the built environment in combating chronic disease. The D4AS campaign wisely channeled its messaging through the county’s public health officer during the zoning revision. “Planners, policymakers, and the general public listen keenly to what health officials have to say,” Robinson says, a message she shares with other municipalities.

Across the country, a partnership of public health and design organizations published Active Design Miami (ADM) at the start of 2017. The primer encourages widespread adoption of healthy building and community design principals by municipalities and third parties. ADM takes a familiar holistic approach that targets parks and open spaces, development patterns, transportation and mobility, and buildings.

One instructive case study for ADM is the Million Trees Miami campaign, launched in 2011, which seeks to increase the tree canopy cover for Miami-Dade County to 30 percent by 2020. Local research positively correlates canopy cover with higher incomes and shows that minority communities often lack this basic urban amenity.

Another initiative firmly rooted in active design is Miami’s Underline. This 10-mile linear park and recreation trail beneath the MetroRail will link diverse neighborhoods to the south of downtown and intertwine modes of transport—a paradigm shift for this car-dependent and sprawling city.

As the pioneering 2018-IgCC comes together, the ways in which developer compliance streamlines with LEED certification will be explored. Many of the building performance credits pursued by developers through LEED certification impart parallel benefits to occupant health, in lighting quality, ventilation, non-volatile construction materials, and enhanced green space. If widespread local adoption sets in, the reach of such standards will grow exponentially.

David Walls, executive director of sustainability programs at the ICC, anticipates a high amount of interest, and stresses that the ICC and its partners will provide “a variety of support resources to jurisdictions considering adoption.” Above-code certification programs pilot advances in green design, while model codes take up the rear, ensuring no one falls too far off pace. “Basically they are push-and-pull tools,” Walls says. The system is chugging along, but will it rise to meet the immense public health challenge now banging at the door—those modern ills of place and behavior that are prematurely killing us?

This article was originally published by Architect on June 20, 2017.